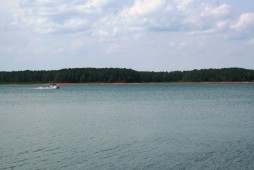 Thurmond Lake has risen almost 8 feet since December as a result of the regular rainfall throughout January and February. However, the return to full pool may still be elusive.

According to the Army Corps of Engineers, requests to keep the outflows from Thurmond Lake at 3,800 cubic feet per second (cfs) have been denied. In February, the outflows increased to 4,000 cfs in following with the drought management plan in place. While many groups advocated to keep the lower volume in order to build the lake back up to full pool, they were ultimately denied based on the following environmental reasons:

The Corps maintains that recent rainfall has been the reason for the increase in lake level, not the decreased outflows. They predict that with continued rainfall, the lake will return to full pool on its own. However, they cannot predict when that will be since we continue to have dry periods without rain. When we have steady rainfall for at least one year, then they will be able to accurately predict an end to the drought. Until then, we’ll keep our fingers crossed.