The water management website came back on line about October 11 at the same URL Water Management Website .  The new interface is not yet available so the site still has the previous look and feel.  Although most of the key features work (current elevation, declaration, prediction, etc.) you will find some plots and links yield errors.  They estimated that the new interface would be available in 4 to 6 weeks.

Both lakes’ elevations are now below full pool.  Hartwell is at 658.99 ft-msl and Thurmond is at 328.08 ft-msl.   Lake Russell is in the upper portion of its conservation pool at 474.99 ft-msl.  Releases from Hartwell are projected to decrease from over 6000 cfs cfs to 3890 cfs next week with no generation over the weekends.  Releases from Thurmond are projected to drop from 6000 to 4510 cfs next week.

The 10 week projections show Hartwell being at 656.90 ft-msl on January 11 and Thurmond roughly balanced at 326.80 ft-msl.  This is based on Hartwell inflows transitioning from 67% of normal to 100% and Thurmond inflows transitioning from 41% to 90% of normal.  The projection show the lakes staying about 1’ above the winter drawdown (see discussion below).   The FSRB and Lake Hartwell Association and other groups have asked the Corps to remain above the winter drawdown curves.

The dry weather continues.  The previous 30 days has seen the precipitation in the basin was no higher than 50% of normal and the upper basin was in the 10-25% of normal band.

FSRB, Lake Hartwell Association, Governor Deal and other stakeholders had asked Col. Tickner to either forego or restrict the annual 4 foot winter drawdown.  He announced in early October that they have examined the issue and felt it prudent to follow the current operation manual.  He cited the following four reasons:

“1.     NOAA forecasts a low probability for drought in the entire southeast through December 31.

2.       NOAA also confirmed that the three-month precipitation outlook shows equal chances for above- and below-average rainfall – the same forecast we received for the summer this year.

3.       The ground throughout the basin remains moderately saturated from above average rains over the spring and summer. This means the reservoirs remain responsive to rain events, and this responsiveness will be more pronounced in the colder winter months. Any rain storm we have will cause greater runoff than a year ago.

4.       And perhaps most importantly the El Niño Southern Oscillation (ENSO) forecast is neutral. This means there is no sign of going into a La Niña (dry) pattern. Every major drought we’ve had has been during a La Niña.  NOAA’s predictions show a high probability that conditions will remain neutral.”

He also cited how fast elevations can rise when the soil is saturated. He gave the example of Hartwell rising 4 feet in 5 days in July causing the spillway gates to be opened for the second time in its history.  This also filled Lake Russell to its flood storage capacity.

He did state:  “We continue to monitor the short and long term forecasts, and if dry conditions begin to emerge we will adjust our outflows in effort to avoid dipping below guide curve in accordance with our drought contingency plan.”

He also addressed claims that the July event was a “100 year event” by stating that the NOAA precipitation frequency model indicated a “10-year event”.  The Thurmond basin experienced a “3-year event”.

However, later in October the Corps announced they had secured additional funding to initiate an approximate 12 month study to assess whether a lesser drawdown would yield acceptable risks (damages).  The study will look at 2 issues:  1) the Probable Maximum Flood (PMF), which is the greatest rain event the basin could ever expect, and 2) the 100- and 500-year rain events.   The key is to examine the conditions as the currently exist in the basin.  The FSRB feels that is likely a lesser drawdown would suffice.  However given the changes that have occurred throughout the entire basin it is important to base changes in the operation manual on the current and future conditions.  We believe that given the current long term forecast, staying above the current drawdown curves is prudent this year.  A final area that we have long supported is to eliminate any draw down when operating under the current drought trigger levels 1 or 2.  We will follow closely the results of this study and push to reduce the draw down over this winter if the dry conditions continue.  We applaud the Corps for obtaining the funding to accomplish the study and reacting to stakeholder concerns in this area. 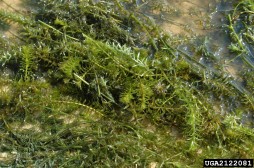 The hydrilla presence in Lake Thurmond continues to worsen.  The latest aquatic surveys indicate that about 641 miles of the shoreline and about 5000 acres are affected.  Corps estimates indicate that hydrilla is occupying 44% of the available habitat so unfortunately there is great potential for continued growth.  The previous limited herbicide treatments have not arrested the spread.  Besides clogging coves and boat docks the hydrilla harbors a type of algae that cause a fatal neurological condition in eagles when they feed on coots which eat the hydrilla.

One of the options to further control the hydrilla is the possible introduction of sterile grass carp to slow the spread of the hydrilla.  These are non-native fish that are controversial in that, although effective, they don’t just gobble down hydrilla but many kinds of aquatic plants.  It has been said that dock owners love them and fisherman hate them.

A survey stated in February by the University of Georgia was designed to poll some 8000 stakeholders about their perception of aquatic plant management.  The results have only just been received by the Corps.  They will next be reviewed by the SCDNR and GADNR and any issues of concern addressed.  At that point the results will be released.  The costs are high to stock enough carp to control the weed in a 70,000 acre lake.  Also the fish have to be stocked at a 6-7 inch size to avoid being eaten.

Currently there is no funding available.  The Corps has requested funding to conduct the environmental assessment that is required to amend the aquatic management plan.   No funding has yet been approved.  During the 2013 recreation season the Corps did not find any significant impact around their ramps or beaches at Thurmond.

Private property owners can treat nuisance aquatic weeds around their docks by obtaining a permit from the Corps.  They then must contract with companies or individuals that hold a state aquatic plant applicator’s license.  Charges typically range in the $600-$700 per acre.  However caution must be exercised near irrigation intakes to avoid collateral damage.  Also there are certain periods of the year when the hydrilla is most receptive to the herbicide.  When the water temperatures drop below 70o F the plants begin to go dormant and will not accept the herbicide.

Lake Russell had some hydrilla in past years but according the Corps documents No hydrilla was detected in Russell Lake in 2010, 2011 or 2012.  No treatment was planned in 2013.

Aquatic plants have not become abundant in Hartwell Lake. Therefore, no Corps treatment program was planned for CY 13.  There is concern that hydrilla will be moved from J. Strom Thurmond Lake or Keowee Lake into Hartwell Lake.  Rangers and the Lake Hartwell Association are observing any aquatic vegetation sightings.

Periodically we get questions on what is going on with the 1680 foot span carrying Route 378 Bridge over Lake Thurmond.  The project started in April of 2010 has essentially been on hold since last year.  There have been a lot of rumors on what is the problem including shifting columns and improper concrete.

Recently there have been several articles on the bridge status.  The GA DOT announced that a root cause has been determined.  During their construction, the six existing columns were compromised and their structural integrity is in question.  The damage was caused by the rare chemical reaction called delayed ettringite formation (DEF) caused by high early temperatures (above 70oC) during the curing process.

The delayed formation of the mineral ettringite, which is a normal product of early cement reaction with water, causes the issue.  The effects are visible displacement and cracking.  It can also increase the risk of secondary deterioration such as freeze/thaw attack or reinforcement corrosion.

The rebuilt columns will be of a new design which is expected to be completed in October or November.  There has been no update on the new work schedule, cost or completion date.  The project is currently about $6M over the original amount.

Corps to Reduce Visitor Services in 2014

We received the following Press Release concerning reduction in visitor services during 2014:

The Corps selected recreation areas for full or partial closures based on an analysis of its recreation program, which included visitation numbers, costs to operate and maintain parks, and the location of similar facilities. These recreation areas were selected to minimize impacts to the public and surrounding communities while achieving the necessary cost reductions.

“During 2012 and 2013, we avoided complete closures of recreation areas at Hartwell and Thurmond by reducing service levels and shortening operating seasons to lower overall operations and maintenance costs,” O’Bryan said. “Reduction in service levels includes reducing frequency in cleaning, mowing, water safety outreach, trash collection and some maintenance. Unfortunately, continued funding constraints and uncertainties have resulted in further actions for the 2014 season.”

“The Corps, along with our state and local partners, will continue to provide public recreation opportunities,” O’Bryan said. “However, fiscal constraints create challenges to recreation program services at Corps projects.”

The complete and partial closures are listed in the tables below. Except as noted, all affected recreation areas closed at the end of the 2013 recreation season and will not reopen in 2014.

For the most current information on Hartwell Lake park seasons, visit the website at  http://www.sas.usace.army.mil/lakes/hartwellor call the Hartwell Dam and Lake Office toll free at 888-893-0678.

For the most current information on Thurmond Lake park seasons, visit the website at  http://www.sas.usace.army.mil/lakes/thurmond or call the Thurmond Lake Office toll free at 800-533-3478.

Take a moment to honor our veterans on Monday Veterans Day.  We hope many of the veterans got to enjoy this three day weekend with the waiving of day use fees for all veterans, active and reserve component service members, and their families at Corps-managed recreation areas on Thurmond and Hartwell.