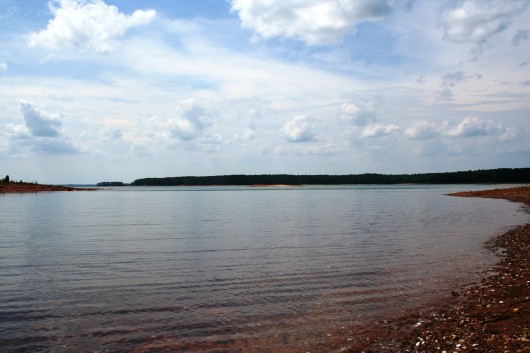 In our August 19th Release we reported on a  meeting facilitated by The Nature Conservancy and the Fish & Wildlife Service about the possibility of running some tests to quantitatively determine environmental impacts in the lower river basin caused by lower flows.  At this meeting some of the water experts discussed whether flows below 3600 and 3100 could be accomplished and assessed.  At the December 11 Drought Response Committee meeting (see below), Stan Simpson, Water Manager with the US Army Corps of Engineers, reported that the Savannah River is currently following a 3100 cfs Level 3 wintertime flow window between November 1 and January 31. (Normal low flow is 3800cfs)

Despite this reduction the reservoirs are continuing to decline. The Corps believes that it appears there is still some room for an additional reduction of several hundred CFS without impacting downstream intakes. They have proactively requested concurrence from the state and federal resource agencies for a deviation from the drought management plan to reduce Thurmond outflow to 2800 CFS for several weeks.  We have had previous discussions with the Corps and resource officials about the importance of determining the minimum acceptable seasonal flows.

This additional flow reduction could present an opportunity for the USFWS and TNC to collect data at lower flows.  Several of the Phase 2 study alternatives also involve studying flows lower than 3600 and 3100 cfs.  This is a significant step to go below 3100 cfs and marks the first time the releases would go below the 3100 cfs benchmark since the 1989 Drought Contingency Plan was developed.

It is important to remember that this deviation to approved drought operations, if it is to occur, can’t be done unilaterally by the Corps.  Consent of the Resource Agencies is required before any action can be taken.  The consent was requested last week.  The Corps has indicated that they will expedite the implementation of the deviation as soon as concurrence is received.

The SC Drought Response Committee at their December 11 meeting upgraded the entire state drought status one level in every county statewide.  All of the SC counties in the upper basin are assessed to be in a severe drought status.  The same is true on the GA side.

The SC State Climatologist, Dr. Hope Mizzell reported that “Most locations that were upgraded to severe drought have received less than 50% of normal rainfall over the last 60 days resulting in deteriorating hydrologic conditions.” The committee was briefed that the last time this many counties were in severe drought was winter 2008/spring 2009.

The Duke Energy representative stated two lakes controlled by Duke Energy could be at considerable risk for water resource related issues next summer. Without significant rainfall (greater than the weekly average) the Keowee-Toxaway Lake levels (particularly Lake Jocassee) are not expected to increase during the winter of 2012 – 2013.

The 3 month climate forecast gives the SRB an equal chance of above, below or normal precipitation.  There is a slightly greater chance of above normal precipitation in the extreme upper basin.  This prediction is based on the climate models.  It is considered unlikely that a fully coupled El Niño (colder wetter in the SE) will develop during the next several months. A neutral condition is now favored through the Northern Hemisphere winter 2012-13 and into spring 2013.

In November, the precipitation over the Hartwell Basin was less than 20% of normal and over the Thurmond Basin was slightly over 45% of normal.  Natural inflow remains historically low.   The 28 day average for Lake Thurmond’s largest tributary the Broad River is at the 1.2 percentile.  Lake Hartwell has 56.5% (19. 84 feet) conservation storage remaining while Lake Thurmond has only 15.2% conservation storage remaining (2.58 feet).

Just this afternoon we received a copy of the final edition of the Thurmond Economic study.  This was done by the Clemson Strom Thurmond Institute SC Water Resource center.  It was funded by Duke Energy.  The official title of the report is “Regional Economic Analysis of changing Lake Levels in Thurmond Lake”.  This report is too big to include in a Lake Release (over 50 pages).  If anyone would like a copy please email us and we will send you a PDF copy of the report.

The Savannah District released the latest edition of its electronic newsletter Balancing the Basin in late November.  It has articles on the drought, discussion of the August workshops, links to a video from Colonel Hall and the slides presented during the workshop.  There is also a section on frequently asked questions from the workshop.  The news can be found at this link: ENewsletter Nov2012

The Corps has issued two press releases announcing the recycling of Christmas trees at Hartwell and Thurmond Lakes to improve fish habitat.  The trees must be natural Christmas trees (no artificial trees) and all ornaments and tinsel must be removed before drop-off.  Dumping of wireframe wreaths, yard debris, and household trash at the sites is strictly prohibited.

The trees will be collected at Hartwell from Dec. 26 through Feb. 15.  The trees can be dropped off at the following locations:

At Thurmond the trees will be collected Dec. 19 through Jan. 9 at the Riverside Middle School at 1095 Furys Ferry Road in Evans, Ga.  Corps rangers and volunteers will place submerged trees around fishing piers and in other locations to improve fishing habitat. Additional trees will be staged at select boat ramps around the lake for anglers to use. To obtain a list of locations where the trees will be available, contact the Corps’ Thurmond Lake Office at 1-800-533-3478after January 10.  For more information or to volunteer, contact the Thurmond Lake Project Office at 1-800-533-3478

by: Harry and Barb Shelley