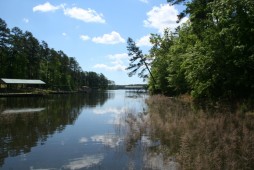 Although consistent weekend rain has been a bit of a bummer, you can see the payoffs as you drive over Thurmond Lake. Once-dry coves are now filled with water and most docks are floating again. The last time Thurmond Lake was at full pool was March of 2011. Steady, significant rainfall seems to be the main factor in returning the lake to its normal depth.

The Thurmond sub-basin received almost 5 inches of rain in April, well over the average 3.54 inches. Due to steady rainfall throughout the winter months, the ground was significantly saturated, allowing most of the April rainfall to rush down and fill the lake.

In other good news, as of May 7, the Thurmond basin has officially “climbed out of drought status all together,” according to the Army Corps of Engineers. Drought operations have ceased and officials are predicting that the current lake level will be sustained at least until June. Under no outflow restrictions, the lake will be providing all aspects of recreation, wildlife management and hydropower.