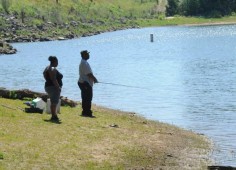 There may be some new fishing regulations at Thurmond Lake and other public waters in the area this year. Up for renewal is the current agreement that allows anglers to fish in both Georgia and South Carolina  waters with only one license, and the states are taking advantage of the opportunity to change some of the rules, according to the Augusta Chronicle.

Both states have been hosting public meetings to discuss the proposed changes. While the new rules will still allow anglers to fish both states with one license, the amount and size allowed of each species of fish may change. Proposed changes include decreasing the limit on trout from eight to five fish along with changing the creel limit for stripers, hybrids and white bass in reservoirs. One example would be decreasing the creel limit from 15 fish to 10 fish but allowing anglers to keep up to three 26″+ fish instead of only two 22″+ fish.

Read about more of the limits here.