Hartwell’s and Thurmond’s elevations remain over the winter draw down rule curves.  Currently Hartwell and Thurmond are slightly over full pool at 660.65 ft-msl and 330.07 ft-msl respectively.  Lake Russell is slightly below its conservation pool at 474.71 ft-msl.  These elevations have occurred despite the lower rainfall in February.  Hartwell received about 65% of normal rain and Thurmond received about 86%  of normal.  As discussed in the March 5 Balancing the Basin (BtB) the unusual winter weather with some snow and ice coupled with the saturated ground and lack of evapotranspiration resulted in maximum run-off into the lakes.  This allowed them to remain above the guide curves. 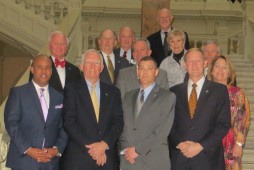 Output flows from Thurmond have remained high, averaging over 9000 cfs in February.  Releases have been reduced with the average being about 5300 cfs so far in March.  With the rain predicted this week, the 7 day declaration has the flows increasing to 8500 cfs to maintain the lakes at about full pool.  The March 12th BtB mentioned that work on the Russell and Thurmond Dam Gates necessitates not exceeding summer full pool.  The article also cited the possibility of storing some extra water at Hartwell to be released “gently”. This is a positive step in treating the three lakes as a system and not separate entities.

The current repair work at Thurmond was started earlier this year and is expected to take up to 2 years to complete.  Scott Hyatt the Thurmond Lake Project Manager reported that the work involved repairing the metal surface plates of the gates.  It was identified during the previous 2010-2012 extensive work on the gates.  One lane of route 221 will be closed during the work.  The original discussion of the work indicated that there were no specific actions to maintain lower lake levels during the work. The press release was silent on any impact to above full pool elevations.  The FSRB will get some additional data on the specifics of the work for the next Lake Release.

The latest 10 week projections show Hartwell being at 660 ft-msl on May 14 and Thurmond balanced at 330.10 ft-msl.  This is based on Hartwell inflows transitioning from 84% of Normal to 100% and Thurmond inflows transitioning from 86% of Normal to 100%of normal.  The projection shows the lakes staying at or about at the full summer pool elevations.  The current winter drawdown guide curves show the lakes reaching full pool not until April 1.

The last 30 days have been dry with most of the SRB seeing 50-75% of normal precipitation.   The last 14 days have somewhat wetter with parts of the upper basin seeing 110-125% of normal.  Consequently the USGS Drought Watch for GA and SC currently shows no drought in the Basin.

The US Drought Monitor shows only a small section in the extreme north east corner of Georgia in a low level (abnormally dry) drought.  The US Seasonal Drought Outlook through the end of March shows an equal chance of above, below or normal precipitation.  The 3 month seasonal shows the same.   One of the main reasons for the continuing equal chance is the El Nino – La Nino conditions in the Pacific Ocean. are expected to remain in a neutral condition through the spring.  The models show a 50% chance of an El Nino (warmer sea surface Pacific Ocean temperature) developing during the summer or fall.  In the winter this produces generally warmer and drier conditions.

The ground water table continues to increase as the aquifers recharge.  A check of the USGS well in McCormick shows is within 8% of the median value for the month of March.

On Friday March 8, SC Representative Don Bowen from Anderson led a bi-partisan delegation of SC lawmakers to Atlanta.  This was part of a continuing series of meetings of the Savannah River Caucus consisting of both members of the Georgia General Assembly and the South Carolina General Assembly.  The group is jointly let by Representative Bowen and Representative Alan Powell of Georgia. SC hosted the GA members last April and the group was formally initiated in September at a meeting at Lake Hartwell where both Governors attended and pledged their support.

We were privileged to be invited to attend the meeting in Atlanta.  The SC legislatures were formally welcomed by both houses of the GA legislature.  A resolution was passed in the GA legislature formally recognizing the Caucus and its goals: to bring adaptive management principles to the use of the water in the upper lakes and the entire basin and to align rules and requirements across the basin for the stakeholders and users.

After the formal legislative actions the legislatures from both sides of the Basin sat down for a working lunch.  Finally all the right people were in the same room.  We were pleased at the spontaneous, frank and cooperative nature of the discussions.  The group not only wants to see updated management practices for water but also wants to work towards making the boating and fishing rules consistent across the lakes and river.  They discussed safety requirements, catch limits and even personal carry permit issues.  There were representatives of the key committees that are involved in these areas.  Both sides said that at the next meeting they will ask their respective resource agencies to make a list of specific boating and fishing regulation differences so that they can examine what legislatively needs to be done.  For water management, they recognize that only by developing a united front will the states’ requirements and desires be recognized by the Federal agencies.  This work promises to enhance the benefit of the use of the Basin to citizens of both sides of the border.

The Drought Plan update study was formally kicked off last September at a signing ceremony at the SC/GA Water Caucus meeting at Lake Hartwell.  The Corps has indicated that they will be finished analyzing the modification alternatives and produce a Draft Report by June 2015.  There will be opportunities to review the results by the stakeholders.  There are 5 operational alternatives and one related to the best refill approach for the selected alternative.  The Corps has indicated that a form of adaptive management will be written in to each alternative.   The Lake Hartwell Association and the FSRB will continue to push for this, emphasizing the need for real time data.

It is anticipated the Nature Conservancy will be setting up a near-term workshop to address defining the ecological flows related to the best operational approach for the alternative that they are coordinating (Alternative 3).

Over the last few weeks the Savannah Harbor Expansion program has experienced several ups and downs.  Initially the Obama administration indicated it’s not ready to seek construction funds for the $652 million dollar project.  There was no construction money in the 2015 budget proposal released the first week in March.

The issue revolves around a water resources bill covering nationwide dam, river and harbor projects.   The senate passed a version last May and the House passed a version in October.  However the two versions have not been reconciled and sent to the White House so the associated projects can be started.  Governor Deal said that the State would start construction using $231M of state funding (its 40% share).  The White House then stated that the state won’t be allowed to use its own money to start.   This caused the GA Governor to complain in a letter to the Secretary of the Army that the project is in “regulatory purgatory”.

When the project does begin there are many requirements that must be met based on the law suit settlement between the Corps, the Ga Port Authority versus environmental groups and South Carolina government agencies.  A key to this is the proof of the new harbor oxygenation system.  If the conservation groups are not satisfied with the proof the litigation can be reactivated.

Two key areas that the FSRB has previously discussed are the long delayed licensing settlement for the Augusta Canal and the elimination of navigation as authorized purpose for the basin.  The settlement provides conservation efforts related to decommissioning of the river’s navigation status above the harbor.  The goal would be to allow for the partial return of the lower river’s natural meandering course.  The settlement also includes GA Port Authority help and funding to achieve the final relicensing of the Augusta Canal.   Formally establishing minimum flows diverted from the shoals portion of the river into the Canal has been a major operational restriction during low flow periods.

Happy Saint Patrick’s Day.  Stay safe out there and enjoy the beauty of the entire Savannah River Basin.