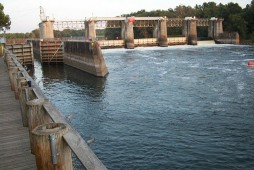 The U.S. Army Corps of Engineers announced they will fund the $300,000 feasibility study of repairs and updates to Lock and Dam.

“The work plan funds 29 feasibility studies, six projects in the Pre-Construction Engineering and Design phase and 38 construction projects or elements of projects to completion,” a release said.

“Augusta commerce and recreation have developed around the deepened Savannah River ever since the lock and dam was built during the Great Depression,” Congressman Barrow said in a release. “Business leaders on both sides of the Savannah River agree that this project is vital for the economic stability of the CSRA. Moving this project forward has been one of my top priorities, and I am proud and encouraged to see progress being made to protect the jobs that depend on the New Savannah Bluff Lock and Dam.”