Both lakes remain slightly over full pool.  Hartwell is at 660.13 ft-msl and Thurmond is at 330.07 ft-msl.   Lake Russell is approximately in the middle of its conservation pool below at 473.79 ft-msl.  Releases from Hartwell are projected to increase from 3973 cfs to 6370 next week with no generation over the weekends.  Releases from Thurmond are projected to drop from 8675 to 8215 cfs next week.   These releases mark the first time in quite a while that the releases are approaching the normal range.

The 10 week projections show Hartwell being at 657.40 ft-msl onNovember 23 and Thurmond roughly balanced at 328.00 ft-msl.  This is based on Hartwell inflows transitioning from 178% of normal to 100% and Thurmond inflows transitioning from 240% to 100% of normal.  AtWednesday Water Caucus (see below) Col Ticknor was asked to evaluate what actions would be necessary to avoid lowering the lakes the full 4’ draw down over the winter.  He indicated they would examine this later in the fall. 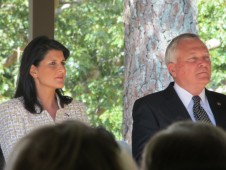 On Wednesday the second meeting of the GA-SC Water Caucus was held at the Big Oaks Recreation Center in Hartwell GA.  SC Representative Don Bowen and GA Representative Alan Powell hosted the meeting. Headlining the meeting was Governor Nikki Haley of SC and Governor Nathan Deal of GA.  Both Lieutenant Governors were also in attendance.  The audience of approximately 400 included 30 or more of the GA-SC Caucus members, heads of state resource agencies, stakeholders as well as many representatives from the local, state and federal levels.  It was very hard for the organizers to credit all those that were present, there were so many!

We have been working with Lake Hartwell Association (Herb Burnham) as well as other lake groups for the last thirteen years. LHA did a great job of coordinating with Reps Bowen and Powell, the Corps, and SC and GA to organize a very well-run event.

Most speakers addressed moving forward and talking out the problems of sharing the load during a drought, and working out the most efficient way to manage the SRB. Harry was one of the Stakeholder speakers and he pointed out how the stage is now set to move forward for more adaptive management.  Other stakeholders, including Herb Burnham from LHA, and Ben Turetsky from FOLKS (Friends of Lake Keowee) and Tonya Bonitatibus from the Savannah River Keepers also pushed for adaptive management while considering the needs of all users.

Governor Deal acknowledged the high visitation and economic value of the Lakes.  Governor Haley expressed the need to avoid litigation and the criticality of working together for a long term solution.  As a show of solidarity both Governors were presented with a flag that had flown over the other states capitol building.

Colonel Ticknor stated that, “This signing event represents one step forward in a greater effort to perform a full Comprehensive Study that will examine extensive interactions of water resources, project purposes in the basin.”  He added “Investing into the Savannah River Basin is well worth our efforts. This basin is an important resource shared among us all, and we all, as stewards of this resource, share responsibility in its upkeep.”

Jud Turner, Director of the Georgia Environmental Protection Division, Alvin Taylor, Director of the South Carolina Department of Natural Resources stood together and reinforced that the states are working together on water issues and do feel an urgency even though the lakes are at full pool. They both pointed out other issues with water that their states are facing.

Clemson scientists reported on the progress of the Intelligent River Project. Test buoys are in place and data is starting to be generated. Ultimately data will be available not only from the buoys but from all public sources. This capability has the potential to be key to implementing a fully adaptive management approach.

It is often said there is power in numbers.  The Coalition legislative members represent around 2,000,000 constituents.  This interstate coalition is unprecedented  and has support at the governor’s office.  The success will be the coalition’s capability to develop a legislative package to get resources from both states to the resources agencies to complete work to update the complete operational plan and examine the purposes of the project. 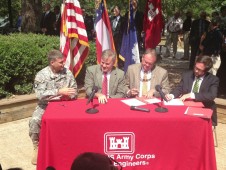 The long-awaited second portion of the Savannah River Basin Comprehensive Study has officially begun.  The signing was held in front of the governors during the Water Caucus. Colonel Ticknor, Jud Turner (GA EPD), Alvin Taylor (SC DNR), and Deron Davis, of The Nature Conservancy were the signatories. We must not forget that the states could not raise the funds needed ($250,000 from each state) and The Nature Conservancy became a Non-Governmental partner. It is believed that this is the first time that they are full partners in a Federal Study.  The Federal Monies were raised by then Congressman Gresham Barrett and others FIVE YEARS ago!!

This is not the end, it is the beginning. Now the fun begins. There has to be a lot of compromising to come up with a plan that answers two questions. 1) How low can reservoir releases be reduced at Thurmond Dam during drought conditions? 2) How long can these recommended minimum outflows be sustained before significant impacts would occur to the economy and environment?

The Caucus was exhausting but, oh so exhilarating!  We were gratified to hear the Governors recognizing the economic importance of the lakes and their goal of avoiding long-term litigation and achieving a sustainable management plan.

We will keep you posted.