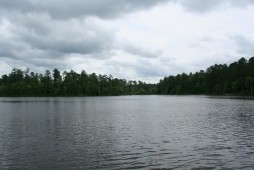 Current levels are 661.32 ft-msl (Hartwell) and 330.15 ft-msl at Thurmond.   Both lakes remain over full pool!  The current weather pattern of pop up storms has helped to keep the ground saturated and lake levels up.  The general random patterns of these storms cause the distribution of the rainfall amounts to vary widely over the drainage basins.   Over the last 30 days the Hartwell and Thurmond Basins have received anywhere from 110 to over 200% of normal rain.  Around the Augusta region there are several small areas that have received over 600% of normal rain!

With the Corps Water Management Web Page down (see below) there is no current public projection.  The 30 and 90 day National Weather Service precipitation forecast shows a 40% chance of above normal rainfall for our area.  The temperature forecast shows an equal chance for above, normal or below temperatures.  The seasonal drought outlook through the end of September shows no drought posted or predicted for the Southeast.  One of the drivers for this prediction is the continued neutral conditions in the Pacific Ocean for the winter of 2013-14.  The climate elements for a continued great recreation season remain in place.  The National Weather Service  3 day short term projection shows the potential of 2.5 to 4” of rain in the upper basin due to the flow of moisture from the Gulf.

CORPS WEB SITE DOWN FOR MAINTENANCE:

In the June 25 issue of Balancing the Basin (BtB) the Corps announced that the Water Management Web page would be down for unplanned maintenance.  There was no definite time frame given but it was estimated to be “several weeks”.  From our experience the site was becoming more unstable and portions of it were sometimes not available.

If you are on Facebook or Twitter the Corps will post daily updates.  If you follow the Corps on these sites you will continue receiving updates.  The Facebook page can be reached at:  http://facebook.com/savannahcorps .   The Corps Twitter site is at this link:  www.twitter.com/savannahcorps  .  They provided an option to receive Twitter updates via text message, text “Follow SavannahCorps” to “40404″.  (Data rates apply) The notifications can be turned off by texting “Stop” to 40404. You do not need to have a Twitter account to receive text updates.

In the July 1 issue of BtB the corps issued a revised water release declaration for this week.  The new declaration increases the outflows at Hartwell to 11,600 cfs; Russell to 12,770 cfs and Thurmond to 15,000 cfs.  The reason for the increased declaration was cited as “higher than expected inflows to the basin and rainfall forecasts”.  The complete declaration is at  Revised Declaration .   Hartwell is only expected to drop 0.6 of a foot and Thurmond is expected to rise 0.3 of a foot.

The issue also states: “While in flood storage, we release water based on observed (actual) inflows, not projected inflows. In other words, we will re-adjust the declaration and reduce outflows if observed inflows measure lower than our projection.”  (See the FSRB June 10 Lake Release for a discussion on the June 11 BtB submission by the Corps concerning a previous declaration and some related FSRB and LHA correspondence.)

We continue to encourage adaptive management to maximize Lake elevations.

The BtB also indicated that they would maintain communication while the Water Management site is down by posting the Declaration and 10 week projection in future BtB’s.

Today the Corps issued the following Press Release concerning required safety spillway gate tests on the 3 lakes.  The tests are expected to have minimal effect on the lake elevations because of the sequencing of the tests.   Hartwell Lake is expected to drop 3” or less and Russell or Thurmond elevations are not expected to be impacted.

SAVANNAH, Ga. – On July 10 and 11 the Corps of Engineers will conduct required tests of the spillway gates at its three dams on the upper Savannah River. The tests will ensure the gates work properly and can be activated in the event of an emergency to protect the dam plus people and property downstream. Tests will be conducted at Hartwell Dam, Russell Dam, and Thurmond Dam. During the tests the spillway gates will be opened 1 to 2 feet to give safety experts the opportunity to evaluate the gates’ readiness. These checks must be performed periodically in keeping with the Corps of Engineers’ Dam Safety Program. Savannah District officials chose this time to conduct the inspections because spring and summer rains filled each reservoir into the flood-storage area putting each above “full pool.”

The test, while visually dramatic, will have only a minimal impact on reservoir levels. In order to conserve water, safety officials will begin the test at Hartwell Dam, the uppermost of the three. By doing so, the same water can be used to test Russell Dam and then Thurmond Dam. The test will lower Hartwell Lake only about 3 inches and will have little net impact on the other reservoirs. Hartwell Lake was almost 2 feet above full pool on July 1. The tests begin at Hartwell Dam July 10 at 1 p.m. and will last until 3:30. The test at Russell Dam begins July 11 at 8:30 a.m. and will end at 11. The test at Thurmond Dam begins July 11 at 1:30 p.m. and will end at 4. The public may observe the tests from designated viewing and parking areas at each location. Parking is limited at all locations.  If your schedule permits the water flowing out of the spillway gates is an impressive sight.

With the full Lake elevations we’re seeing more people than in years enjoying water based activities.  However the increased activity also brings the chance of tragic accidents.   The Corps has had several releases concerning safety on the Lakes during the summer.  On Sunday June 23 there were two separate deaths on Lake Thurmond.  On the Georgia side the West Dam a 26 year old Navy officer stationed at Fort Gordon drowned when 5 friends decided to swim to a buoy 50 yards from a roped off swimming area.  In McCormick, SC a 20 year old drowned at the Clark Hill Training Site.

Colonel Jeffrey Hall will relinquish command to Colonel Thomas Tickner on July 19.  We regret we will not be able to attend but we wish good luck to Colonel Hall as he enters the next phase of his life.  He will be retiring from the ACOE.  We have enjoyed working with him and credit him with listening to stakeholders and establishing excellent communications with users.  In addition he has advanced and attempted to put in place several proactive initiatives that have been favorable to balancing impacts on the Lakes.  He has also maintained minimal mandated releases throughout this spring which has allowed the Lakes to achieve full pools for the first time in years.

We look forward to working with incoming   Colonel Tickner to accomplish a needed update to the current Drought Contingency Plan and to evolve the current operation plan to achieve a more balanced adaptive management approach based on technology.