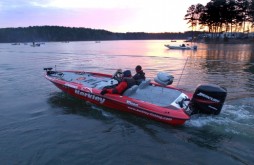 Hartwell’s and Thurmond’s elevations remain well over the winter draw down rule curves.  Currently Hartwell is at 661.9 ft-msl (5.73 feet higher) and Thurmond is at 332.09 ft-msl (5.92 feet higher).   Lake Russell is slightly above its conservation pool at 475.8 ft-msl.  These higher elevations resulted from the well above average rainfall throughout the upper basin.  The Corps announced at the end of December that the Thurmond Basin was 220% of normal (8.5”) and was the wettest since they began recording data in 1948.  The Hartwell Basin received 156% of normal (8”) and the Russell Basin received 197% (7.9”).

Despite the excessive December rain, the month’s average elevations are not the highest recorded.  Hartwell’s average elevation was the fifth highest and Thurmond’s was the third highest.  Incidentally, the highest daily elevation at Hartwell was on April 8, 1964 at 665.40 ft-msl.  The highest at Thurmond was, not surprising, 3 days later, on April 11, 1964 at 336.46 ft-msl.  The driver to the recent rapid rise was intense rain over a two day period that was fairly evenly distributed over the entire sub-basins.  The saturated soil, lack of evapotranspiration resulted in most of the rain turning into runoff.

Since approximately November 1, the lakes have been above the winter drawdown curves.  The Corps plans to increase the outflows from Thurmond from 15,000 to 25,000 cfs for the next week.  This has increased the flows in the lower river to a minor flood stage.  At Clyo, down near the City of Savannah, the river is about 1.5 feet above the Weather Service flood stage.  Due to river channel capacity, it is necessary to maintain maximum water releases so the City of Augusta, and nearby communities, experience water flows that are less than 30,000 Cubic Feet per Second (CFS).  In July the releases were running about 37-38,000 CFS during that high water event.

The latest 10 week projections show Hartwell being at 659.30 ft-msl onMarch 8 and Thurmond balanced at 329.30 ft-msl.  This is based on Hartwell inflows transitioning from 150% of Normal to 100% and Thurmond inflows transitioning from 150% of Normal to 80%of normal.  The projection shows the lakes staying about 0.3’ above the normal winter drawdown curve.

The last 30 days have been abnormally wet with most of the upper basin seeing 150 to 300% of normal.  The last 14 days have been even wetter with the area around Thurmond seeing over 400% of normal.  Consequently the USGS Drought Watch for GA and SC currently shows no drought in the Basin or in any part of GA or SC.

The US Seasonal Drought Outlook through the end of March still shows drought development likely in most of the mid to lower basin.   The 3 month seasonal precipitation outlook shows a 33% probability of below average precipitation in the mid to lower basin and an equal chance of below, normal or above precipitation in the upper basin.  Obviously the recent weather prediction missed the excessive rain.  One of the main reasons for the continuing uncertainty is the El Nino – La Nino conditions in the Pacific Ocean are expected to remain in a neutral condition into the summer.   This creates considerable uncertainty in our area in regard to both temperature and precipitation.  The current 7 day forecast from the NWS projects an accumulative total of ¾ to 1” of rain in the upper basin.   Given the continuing long term uncertainty FSRB believes it is still prudent to remain somewhat above the winter drawdown curves.

The wet summer and recent rains have finally caused an increase in the ground water table.  A check of the USGS well in McCormick shows it has increased about 3’ but still is over 3’ below the median value.  This is a strong reminder of how slowly the underground aquifers recover from a severe drought.

This coming year promises to be an active year in terms key Basin management activities.

There are two active studies that are scheduled to complete the bulk of their modeling and analysis work during the year.

The first is the Phase 2 study which was signed at the September SC/GA Water Caucus Meeting at Lake Hartwell.  Colonel Ticknor, Jud Turner (GA EPD), Alvin Taylor (SC DNR), and Deron Davis, of The Nature Conservancy were the signatories.  Basically the study is designed to develop a plan that answers two questions. 1) How low can reservoir releases be reduced at Thurmond Dam during drought conditions?  2) How long can these recommended minimum outflows be sustained before significant impacts would occur to the economy and environment?  Both the Lake Hartwell Association and the FSRB have been pushing for the inclusion of an adaptive management approach in the study.   The SC/GA Water Caucus is also examining this (see below).

The second is an approximate 12 month study to assess whether a lesser winter drawdown would yield acceptable risks (damages).  The study will look at 2 issues:  1) the Probable Maximum Flood (PMF), which is the greatest rain event the basin could ever expect, and 2) the 100- and 500-year rain events.   The key is to examine the conditions as they currently exist in the basin.  Lake Hartwell Association, FSRB and other groups have recommended adapting a lower winter drawdown.

The other key activity is the continuing work of the bi-partisan GA and SC Water Caucus.  They are planning to introduce joint resolutions in their respective legislatures in January.  The resolutions are expected to commit the legislatures to developing a compact on basin policies including changes to how the lakes and rivers are to be managed.  The two leaders have indicated that adaptive management would be a key component of their concept.  They are also addressing other facets of Basin coordination and have been working with the states’ DNRs concerning hunting, fishing and gun carry permits.  They understand that ultimately a close working relationship with the Federal Representatives will be needed to fully implement final management reforms.

All in all, 2014 promises to be an interesting year.  We’ll keep you informed.

Fishing piers at Amity and Lake Springs are closed due to high water levels. There are retaining walls that are submerged by high water at the West Dam, Scotts Ferry and Parksville recreation areas. 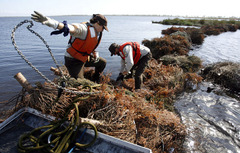 Stay safe out there and enjoy the higher lake elevations.

– Harry and Barb Shelley
Friends of the Savannah River Basin