Friends of the Savannah River Basin 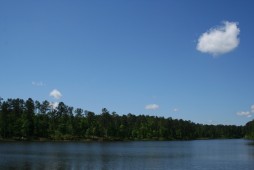 Hartwell and Thurmond are currently both greater than 2 feet above Trigger Level 1.  Therefore they are considered to be out of drought operation (see below). The 7 day declaration through May 17 shows releases from Thurmond remaining at around 3800 cfs.  As promised, the Corps is trying to maintain flows as low as they can, and still be consistent with the present normal operation management plan. We are definitely going to work with the new Colonel to be sure this type of management continues when Colonel Hall leaves.  The Drought Plan update work by the Corps, GA, SC and The Nature Conservancy will begin this summer.  One of alternatives that will be analyzed is a low flow drought recovery option from the preferred chosen Drought Plan update.  This is consistent with the Savannah River Basin Advisory Council recommendation.

Due to the recent rains both the SC and GA US Geological Survey Water Watch shows no parts of either state to be in drought for the first time in a long time.  In fact the 12 month rain deficit at Hartwell and Thurmond Basins has been reduced to 2.4” and 0.8” respectively.  The US Seasonal Drought Outlook for the whole US shows no drought posted/ predicted through the end of July for the southeast.  The three month National Oceanic and Atmospheric Administration climate precipitation probability forecast through July shows an Equal Chance for above, normal or below normal precipitation and a 40% probability for above normal temperatures.  So right now the forecast is favorable for a great recreation season at the lakes.

Get out there on the water and enjoy the lakes.