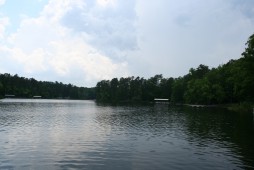 Current levels are 661.56 ft-msl (Hartwell) and 330.46 ft-msl at Thurmond. Both lakes are over full pool! The last time Hartwell was at full pool was June 7, 2011 and for Thurmond it was February 13, 2010. The continued above normal rains and some rain from Tropical Storm Andrea have helped keep the levels rising.

The current prediction (June 5) reflects the pools dropping approximately 3.5 feet over the 10 week period. This was based on Hartwell inputs transitioning from 140% of normal to 85% over 10 weeks and Thurmond inflows transitioning from 134% of normal to 75%. Because of the current elevation conditions, the Corps has indicated that this prediction is being updated and they expect the pools to be at or near full pool through the Fourth of July weekend. It promises to be the best recreation season in years.

The current long term climatological forecast for June through August shows a 40% chance of above normal temperatures and equal chances for above, normal, or below normal precipitation. As a result of this, the Drought Monitor shows no posted or predicted drought for our area.

RESPONSE TO BALANCING THE BASIN

On Friday June 7, it was announced in the Corp’s Balancing the Basin Newsletter an increase in “outflows at the Thurmond Dam to 20,000 cubic feet per second (cfs) by Monday, June 10. Outflows will also increase at Hartwell and Russell.” The stated purpose was to keep the reservoirs mostly out of the flood storage levels and to free additional flood storage for more precipitation. Implied is that there are no impacts to any of the other project purposes. It indicated that the June 5th 10-week pool projection would be updated.

Over the weekend FSRB coordinated with the Lake Hartwell Association and submitted the following response to Colonel Hall and others of the Savannah Water Management Control group:

The FSRB recognizes the decisions that are required to balance the authorized purposes of the SRB projects. Consideration of flood control has certainly not been an issue for quite some time. Extreme rainfall deficits and basin-wide effects have occurred during the last 15 years. During the period there have been two droughts of record with long periods of low yearly average lake levels. The current recreation season promises to be the best in years thanks to the increased precipitation.

The latest BtB Blog announces the increase in “outflows at the Thurmond Dam to 20,000 cubic feet per second (cfs) by Monday, June 10. Outflows will also increase at Hartwell and Russell.” The stated purpose is to keep the reservoirs mostly out of the flood storage levels and to free additional flood storage for more precipitation. Implied is that there are no impacts to any of the other project purposes.

We understand the 10 week projection is also to be revised. The current projection of record (June 5) showed the reservoirs dropping around 3.5 feet by over the projection period. The FSRB believes this current situation is an excellent opportunity to accomplish some adaptive management. Specifically flows should be monitored and adjusted to allow the lakes to be maintained at one to two feet into the flood control storage.

The Southeast River Forecast Center (SERFC) shows the lowest number of river floods occur in the June to August period of the year. The greatest number of floods occurs in the first 16 weeks of the year. The next highest period is September to October. So this time of the year has a relatively low probability of extreme flooding. There is also ample time to adjust downward by the fall should it even be necessary. In the summer, the major risk of significant increase in lake elevation or flooding is caused by tropical storms. The SERFC data show that less than 29% of the significant floods in the lower Savannah River were caused by tropical systems. In addition the aquifers are just barely beginning to recharge. The USGS well at Baker Creek in McCormick County is still below the 10 percentile.

There has been past precedents of allowing encroachments into the flood pool by going over the rule curve. In the 2004-2005 winter period both lakes were kept essentially at or over full pool to support environmental pulses. This is over 4 feet over the current rule curve at a period that has a much higher probability of flooding and increases in lake elevations.

For the above reasons we recommend that the releases be adaptively monitored from the current static declaration to allow the lakes to be maintained at one to two feet into the flood storage area. This will ensure a near or at full pool recreation season, keep the lake elevations well out of level 1 drought trigger and have water “in the bank” should the current neutral conditions in the Pacific evolve to La Nina conditions over the winter. We appreciate your consideration of this recommendation.

The Lake Hartwell Association immediately submitted a strong endorsement of the proposal:

The Lake Hartwell Association is 100% in agreement with FSRB’s analysis and recommendations for applying adaptive management of lake levels at this unusual point in time when the entire basin has an unexpected more-than-ample-supply of water with which to work. Considering the fact that our lakes’ recreation communities have suffered through two droughts of record, and those that have survived may finally be seeing a chance to recover, the Corps now has an unusual opportunity to demonstrate its understanding and appreciation of lake related recreation and economics. We strongly urge the Corps to keep lake levels as high as possible for as long as possible.

Today’s (June 11) Balancing the Basin announced “When the right conditions exist and within our authorizations, Savannah District water managers exercise adaptive management. This past weekend was no exception as the water managers adjusted outflows based on observed conditions throughout the Savannah River Basin.” It indicated that Thurmond releases increased to a maximum of 10,000 cfs and will be reduced to 5000 cfs for the remainder of this week. Hartwell releases may reach 13,000 cfs today and drop to 4600 cfs for the remainder of the week. Flows in the lower river are well over the 75 percentile values.

We will continue to monitor this and push for the minimum releases possible to maintain pool elevations.

Regardless, we are pleased to see that the lakes will not be going down significantly during the prime recreation season as they have the last few years.

Officials with the Corps and the Coast Guard will perform vessel safety checks at Scotts Ferry boat ramp, located on the South Carolina side of the lake in McCormick, S.C., to ensure boaters are in compliance with all safety requirements.

The vessel safety checks will include inspections of various items such as ropes, anchors, fire extinguishers and personal flotation devices. Vessels that pass inspection will be awarded a U.S. Coast Guard Auxiliary decal that informs all boating law enforcement agencies that the vessel has met annual safety check requirements and is in compliance with all federal and state boating laws for that year.

Owners of vessels that do not pass inspection will be provided a written report that identifies the steps to achieving full compliance with federal and state regulations; however, no citations will be issued during the courtesy check.

Passing the vessel safety inspection will not only increase safety on the lake, but may help boaters avoid substantial fines. It could also help boaters obtain a discount on their boat insurance.

All decals are issued annually and become null and void as of December 31 of the year a boat is inspected.

For more information on boat safety requirements or on the boat inspection at Scotts Ferry, please contact the U.S. Army Corps of Engineers or the U.S. Coast Guard Auxiliary at:

Get your boat inspected either via your local Power Squadron or the Coast Guard Auxiliary for safety and enjoy the Lakes!!