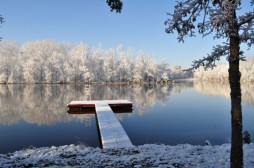 Hartwell’s elevation of 661.54 ft-msl remains well over the winter draw down rule curve (4.34 feet) while Thurmond’s elevation of 327.32 ft-msl is about on the curve (.12 feet).   Thus the two lakes are out of balance (see the near term operational section below).  This is not uncommon since the Hartwell sub-basin quite often receives more rain than Thurmond’s sub-basin.   Lake Russell is slightly above its conservation pool at 475.42 ft-msl.

The latest 10 week projections show Hartwell being at 659.80 ft-msl on March 29 and Thurmond balanced at 329.90 ft-msl.  These predicted elevations would be a few inches from full summer pool.

Currently the Lakes have been out of balance and the releases from Thurmond have been high.   This week the releases have been reduced 10,000 cfs to 17,000 cfs while Hartwell’s have been increased 10,000 cfs to 18,000 cfs.  The projections show that over the next several weeks Hartwell will drop and Thurmond will rise until the two lakes are balanced.   There have been many stakeholder questions about the current and near term Corps operational plan.  We have checked on this and received the following information from the Corps:

“Our plan is to stick with the water manual, which is to do our best to achieve guide curve while meeting all the purposes of the project. At this point the winter drawdown guide curve is on the ascent and Thurmond close to it. Our plan, then, is to use Hartwell’s surplus to supply outflow from the upper basin until both reach equilibrium at guide curve. In other words, we plan to hold Thurmond where it is for now and empty Hartwell’s flood storage. By the time they equalize winter guide curve will be closer to summer full pool.”

We will continue to carefully monitor this and closely follow the on-going Winter Draw Down work that we discussed in the January 5th Lake Release.  The Lake Hartwell Association, the FSRB and other groups will continue pushing for a lessor drawdown.

Stay safe out there and enjoy the lakes.