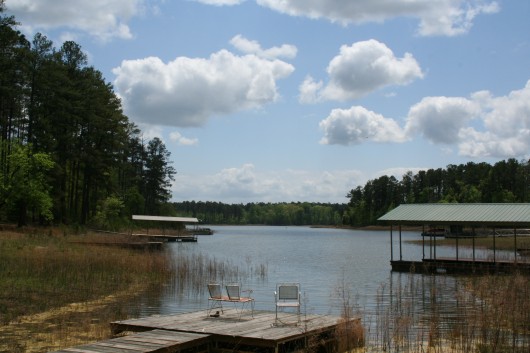 Current levels are 656.98 ft-msl (Hartwell) and 324.84 ft-msl at Thurmond.  The ten week projection released yesterday reflects the flattening of the pools as the plants begin growing and the evapotranspiration increases as the temperatures warm.   It also reflects the continuing slow rebalancing of the pools.  The elevation of Hartwell is projected to drop slightly to 656.40 ft-msl and Thurmond is projected to rise about 1.7 feet to 326.50 ft-msl.   This should bring the pools back in balance before the end of the projection period. The prediction is based on inflows transitioning from 108% of normal to 75% of normal for Hartwell and Thurmond inflows transitioning from 111% of normal to 65% of normal.  The projection is through the week of June 22.  This would put both lake elevations about 3.5 ft below summer full pool into the prime recreation season. The last time the lakes were at this level was at the end of July in 2011.

Hartwell is currently above the Level 1 trigger however Thurmond is still below Level 1 so flows will continue at 4000 cfs or drop to 3800 cfs, if the historical 28 day average flow on the Broad River is below the 10th percentile.  Currently it is flowing at the 43rd percentile.  If the current projection is correct, both lakes will be above trigger level 1 by June.  According to the 2012 Drought Plan flow would then be either at 4200 or 4000 cfs depending on conditions on the on the Broad River.

Last April we were well entranced in the drought with a severe hydrologic drought status.  The last 4 or so months of more normal rains have reduced but not totally eliminated the 12 month rainfall deficits (Hartwell and Thurmond Basins have a little less than 5” yearly deficits compared to 20” and over 18” in April 2012).   Currently the USGS average streamflow maps for GA and SC show normal except for the SRB which are listed as below normal.

The Pacific Ocean El Nino and La Nina conditions according to the NWS are staying as neutral as they have ever seen and are expected to remain so for some time.  Their projections indicate equal chances for normal precipitation until the August to October timeframe.  This is much more positive than we have seen in some time.  The 3 month prediction is for a 40% probability of above average temperatures which can lessen the impact of any rains.  Overall the forecast is definitely more promising but caution remains since the lakes are not projected to reach the summer full pool.  The national drought monitor through the end of July shows no development or persistence of increased drought.

One of the more misunderstood aspects of recovering from a severe drought is the length of time it takes the ground water table to recover versus the surface water in streams or lakes.  Despite all of the recent rains a check of the USGS monitor well in McCormick County indicates it has barely begun to rise. The latest provisional data is less than 2” above its lowest recorded level in 1993.  Therefore continuing water prudence is warranted and needed.

We were honored to be invited to the first meeting of the Savannah River Caucus, led by South Carolina’s Rep Don Bowen (Anderson) and Georgia’s Alan Powell (Hartwell District). We were part of the initial group that included lawmakers from GA and SC, a representative from Hartwell (Herb Burnham, President) and two members of the Corps.  The GA bipartisan lawmakers represented districts from the extreme north to the mouth of the Savannah River.
We were taken to the Republican and Democratic Caucus rooms (this was done to emphasize the bipartisan nature of this effort), the Governor’s office, and then to both the House and Senate Assembly chambers where the officially adopted resolution was read:  TO WELCOME THE HONORABLE ALAN POWELL OF THE GEORGIA LEGISLATURE, ALONG WITH OTHER DEDICATED MEMBERS OF THE GEORGIA LEGISLATURE, INTENT ON WORKING WITH REPRESENTATIVES OF THE STATE OF SOUTH CAROLINA TO STUDY AND RESEARCH ISSUES CRITICAL TO THE SAVANNAH RIVER BASIN AND TO PARTICIPATE IN FURTHER FORMING A SOUTH CAROLINA/GEORGIA JOINT LEGISLATIVE COMMITTEE FOR THIS PURPOSE.

The resolution also outlined some broad objectives of the interstate caucus:

WHEREAS, THE JOINT COMMITTEE WILL HOLD PUBLIC HEARINGS IN ORDER TO GATHER VITAL INFORMATION ON SUCH ISSUES AS BASIN MANAGEMENT, WATER QUANTITY/FLOW STUDIES, GEOLOGICAL STUDIES, ECONOMIC GROWTH, ENERGY ISSUES, ECOLOGICAL/BIOLOGICAL ISSUES, AND SUSTAINABILITY/CLIMATE CHANGES; AND WHEREAS, THE COMMITTEE WILL FOCUS ON STUDYING AND CAREFUL MONITORING OF THE SAVANNAH RIVER BASIN IN ORDER FOR GEORGIA AND SOUTH CAROLINA TO WORK TOGETHER TO SECURE A SUFFICIENT AND SUSTAINABLE WATER SUPPLY FOR THEIR CITIZENS.

As a further show of support the during the introduction in both chambers the corresponding SC Representatives or Senators representing the districts all along the SC side of the basin stood in the front of the respective chambers.

We were very pleased that in addition to the Lake Hartwell state representatives, the Thurmond SC lawmakers (Rep Anne Parks, and Senators Nicholson and Massey) were supportive of the Caucus.  All three approached us and offered their support.

There was a lunch meeting at the Capital City Club where Janice McCord read a letter from Congressman Jeff Duncan that said in part “As we move further into the 21st century, we must become smarter and more adaptive when it comes to water resource management.  This meeting involving elected officials from Georgia and South Carolina is a positive step in the right direction.  As some of you may already know, I recently started a Water caucus in Congress with the same goal of fostering partnerships in Washington.  We need that same spirit of collaboration on the state level, which is why I am excited about the effort you are putting forth today.  We need to ensure that management and oversight benefits our constituents, our states and our economy.  Together we can face the challenges that our water systems present.”  Congressman Duncan also cited the need for multiple levels of effort:  “That is why achieving adaptive and common sense management of our water resources will require extensive cooperation on the state, local, and federal levels.”

An aide of Congressman Collins of Georgia shared with us that he has been working with Congressman Duncan with the new water caucus on the Federal Level.  He congratulated the lawmakers in attendance on a step in the right direction and also emphasized that action will be needed at all levels of government.

You will be part of the process to re-examine the management of the Savannah River Basin.  Town Meetings are planned for both SC and GA in the future.

We feel the caucus is a good step in the right direction.  As the saying goes there is power in numbers.  The combined lawmakers represent over 2,000,000 constituents.  We will keep you informed.

A lot of discussion takes place on the impact on lake releases caused by downriver fish spawning.  However this time of year lake fish spawning can impact the lake balancing strategy.   The GA and SC resource agencies have identified largemouth bass spawning as a priority for water management actions.  The spawning period is defined by lake water temperatures and generally lasts for 4-6 weeks.  Generally this means the peak spawning period is occurs April 1-28.  The Corps indicated that this year the fish spawn stated last weekend.

The management strategy is to try to maintain elevations such they do not drop more than 6” from the highest lake elevation recorded during the spawning period.  This will prevent the stranding of eggs and/or abandonment of nests. Ideally the management strategy would also ensure that the lakes do not rise too much. This reduces the probability of predators being able to reach the eggs and hatchings.  Obvious certain conditions during a severe drought or flood may occur where these stable elevations are not possible.  It can also delay balancing the pool elevations depending on inflows.

Officials to reduce visitor services at Hartwell Lake for 2013 season

SAVANNAH, Ga. – The Savannah District, U.S. Army Co! rps of Engineers, will reduce park operations and visitor services at Hartwell Lake during the 2013 recreation season due to significant projected budget reductions. The Corps will keep closed one primitive campground and partially close six day use areas for the 2013 season in addition to maintaining the reductions in park seasons and service levels implemented in 2012.

Milltown Campground will remain closed for the 2013 season. Poplar Springs and Friendship Day Use Areas will be partially closed during 2013. Boat ramps at these locations will remain o! pen, but all day-use sections/loops will remain closed. Long Point, Stephens County, Mullins Ford, and Lawrence Bridge Recreation Areas will be operated as pack-in/pack-out areas. There will be no restroom facilities or trash pick-up services at these locations, but other facilities such as picnic sites and boat ramps will be open for use during the 2013 season.

Displaced visitors are encouraged to use other Corps-operated parks that remain open or areas operated by state and local governments or commercial concessionaires. “The Corps, along with our state and local partners, will continue to provide public recreation opportunities,” O’Bryan said. “However, fiscal constraints create challenges to recreation program service delivery at Corps projects.

For the most current information on Hartwell Lake park seasons, visit the Savannah District website at http://www.sas.usace.army.mil/ then choose the “Recreation” icon, or call the Hartwell Dam and Lake Office toll free at 888-893-0678.

Get out there on the water and enjoy the lakes.