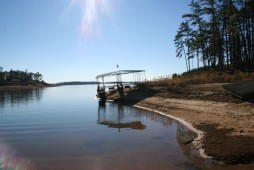 We have pushed for twelve years to improve communication with all users and stakeholders. When we first met with the Corps many years ago, there were very few SR  sites and they  had very little useful information. Colonel Kertis hired a communications expert and we worked with her as she started the Balancing the Basin (BtB) blast.  She left the Corps and we  were a bit dismayed.  However Colonel Hall, after hearing us again groaning about lack of communication, made sure that it continued under Joyce’s replacement, Russ Wicke.  We are impressed with the result and the obvious hard work.

The new format sends out emails as needed during the drought to educate the users and stakeholders.  Anyone can comment, ask questions or express concerns in the comment section.  You can also send in topics to be discussed, we have sent several, including the one discussed today. Why are Hartwell and Thurmond out of balance?  Thurmond is down about 11 1/2 feet, and Hartwell is down around seven feet from full summer full pool..

The newsletter provided a National weather service graphic that indicated that January was the second wettest rainfall in the Hartwell basin since the dam was built over 50 years ago.  This higher rain was consistent with the long range weather projections which showed a higher probability of above average rain in the extreme upper basin.  The BtB did not provide an specific time period to bring the pools into balance.  The technical concern was not to over generate more power than is needed by the SEPA customers thereby maintaining lower electric rates.  This is not unusual when the pools get out of balance.  The ultimate goal is to bring them back into balance as the warmer months approach and the recreational season begins to peak.

We encourage you to sign up for the Balancing the Basin emails.  They are taking communication seriously.  You can subscribe to BtB by visiting the site athttp://balancingthebasin.armylive.dodlive.mil. Enter your e-mail address in the “Subscribe” box in the top right corner and click “Subscribe.” You will receive an automated e-mail from “Feedburner E-mail Subscriptions” asking you to confirm your subscription. Once you confirm, you’ll start receiving automatic e-mail updates every time new content is posted. E-mail addresses are not shared with third-parties and you can discontinue your subscription any time.

The Corps is continuing to actively negotiate with the state and federal resource agencies about returning to the 3800 cfs releases during the refill process.  The above projection is based on the 4000 cfs current releases.  As we discussed previously this deviation to the current Drought Contingency Plan requires concurrence of the agencies.  The agencies that are required to be consulted were identified in a previous Balancing the Basin answer:

Recall for the Corps request to go to 2800 in the winter the only consenting agency was SEPA and they are voluntary.  One of Harry’s pet peeves is that governmental Agencies, when they deal with government agencies, do not have the same stringent time frame as when items are released for public comment. There are many issues and regulations that can be used to extend the response timeframes.  A good excellent example is the Augusta Canal relicensing discussed in our December 22 release where final opinion from NOAA has been in limbo for years.

At the end of January we checked on the status of the hydrilla survey.  We were told that the University of GA needed an updated mailing list of hunters and fishermen to distribute the user survey concerning the issue of the use of Grass Carp.  They should have received it in early February and were to start mailing the survey immediately.  We would be interested in hearing from any of the members if they have received the survey.  We also checked into the money situation.  With the uncertainty in the military budget this year it appears right now that the best case scenario would be a limited treatment of boat ramps and maybe the swimming beaches.

– by Harry and Barb Shelley