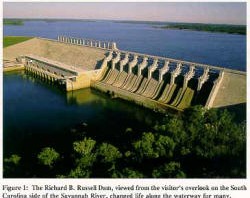 A new system has been designed by the Army Corps of Engineers to improve fish habitat in Clarks Hill Lake / Thurmond Lake that could provide around 7,000 tons of oxygen to the lake per year. The system, which will be based near Modoc, S.C., is comprised of a network of submerged oxygen diffusers that are fed by two above-ground 20,000-gallon tanks, a total cost of $11.3 million.

This elaborate oxygenation system will prevent bass from migrating too close to Russell Dam’s turbines. In the summer, the surface of the water becomes too hot for striped bass. They cannot swim lower due to decreased oxygen in the lower levels of the lake, so their solution is to migrate to cooler and more oxygenated water. Usually, this brings them to the dam, but then they are killed in the fast-moving turbines.

A test run last year confirmed that the system used around 5,100 tons of oxygen and cost $395,000. This year, they are planning to use 5,000 tons between June and September but have also requested an additional 2,000 tons just in case.

Read more from Rob Pavey’s article in The Augusta Chronicle.