The former Little River Marina may be operational again soon as a company from Athens, Georgia, puts the finishing touches on a lease for the marina at Thurmond and Clarks Hill Lake, according to The Augusta Chronicle.

The marina, which closed in December when the Corps chose not to renew the former operator’s lease, has been courted by Classic City Marinas for a few months, and they received the lease on June 1 for one last look-over. Once it is approved, they can begin construction and upgrades to the marina at Thurmond Lake in Appling, Georgia. 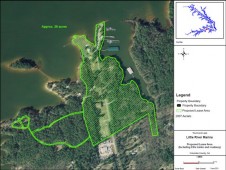 A new store, fuel facilities and even a restaurant are planned for the property, which is great news for Columbia County, Georgia, and Thurmond Lake go-ers. The boat ramp will remain open to the public and operational for a while, at least until construction begins.