A River Runs Through It

By Jessica Garrett, The Nature Conservancy

River management. The very term seems an oxymoron. We all know that nature is beyond our control—witness the floods that have damaged and destroyed communities across the U.S. and around the world in recent years—but today, the story related to “controlling” rivers is more nuanced.

In the United States, the U.S. Army Corps of Engineers alone operates nearly 700 dams. “The Corps is the largest and oldest water management agency in the world,” explains Andy Warner, The Nature Conservancy’s Senior Advisor for Water Management.

Dams allow humans to “engineer” water flow, right down to the number of cubic feet released downstream per second. While the rate of release and variations in that rate may be indistinguishable to the human eye, even small variations can have a dramatic impact on a river’s water quality and quantity, the health of local fish and wildlife populations, and how people who live along the river and its floodplain are able to use it. Droughts, especially prolonged ones like those the Southeast has experienced over the last decade, magnify the power of dams: releases can keep a river flowing or cause it to dry up. 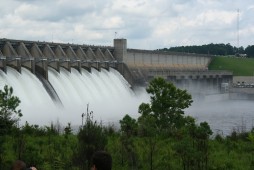 The widespread existence of dams and their broad impact on the natural and human communities downstream are precisely the factors that encouraged The Nature Conservancy to forge a partnership with the U.S. Army Corps of Engineers almost fifteen years ago. In 2002, in light of their shared goal to improve river management across the country, TNC and the Corps launched the Sustainable Rivers Project at eight rivers across the United States. The goal of the project was to “demonstrate innovations in water management that would meet the needs of people and nature and that could be replicated and propagated,” explains Warner.

Will Graf, who serves as Senior River Scientist for TNC and as incoming chair of the Environmental Advisory Board for the Corps, puts it this way: “We wanted to restore freshwater systems—in effect, to ‘re-engineer’ dams to more closely mimic previous natural conditions.”

It’s here on the Savannah that The Nature Conservancy’s South Carolina and Georgia Chapters and the U.S. Army Corps of Engineers are celebrating twin victories this year. Not only have the organizations’ efforts on the Savannah contributed to innovation that has already been replicated across the globe, but TNC and the Corps have also entered a groundbreaking partnership.

Together with the South Carolina Department of Natural Resources, and the Georgia Environmental Protection Division, TNC and the Corps will develop a new drought operations manual for the Savannah. This is the first time The Nature Conservancy—or any non-governmental organization—has been a signatory on a Corps’ river management study “that will produce real operational changes,” explains Eric Krueger, Director of Science and Stewardship for the TNC ’s South Carolina Chapter.

The resulting manual will be more than an acknowledgement of best practices in river management. “It will determine how the Corps makes water releases,” says Krueger.

TNC ’s participation as a signatory reflects the organization’s long partnership with the Corps and the fact that TNC contributed funds as a cost-share partner to the comprehensive study of the Savannah and the three dams the Corps operates along it.

What makes the drought operations manual particularly significant is the period for which it is likely to govern river operations. “The management of rivers is not a whimsical enterprise. There aren’t going to be notable changes on a year-to-year basis,” explains Warner. “With reservoir operations, a 50-year window is the best way to plan for a whole range of needs such as flood protection, hydro-power generation, reservoir and river recreation, downstream ecosystem health and the services the ecosystem provides to society. If you miss the boat, the opportunity to make significant changes won’t likely come again for 50 years.”

While conservationists are used to the idea of protecting land in perpetuity via conservation easements, there is no such infinite protection for water. This makes the new drought operations manual and its potential 50-year lifespan critical to the health of the river and the communities that depend upon it.

When the Corps and TNC launched the Sustainable Rivers Project in 2002, their goal was to create innovation that could be replicated and propagated at other rivers across the nation. On the Savannah, they achieved just that by developing a process to determine how to release water for any freshwater system.

As Warner explains, “When we first started working on the Savannah, we needed a process that would allow us to bring together the best river scientists, mine their collective knowledge and present that information in a way that would be useful to the engineers operating the dams.”

The Nature Conservancy has since expanded its efforts to include other Savannah River stakeholders—from municipalities to power companies and businesses that promote recreation and tourism on the river. Those stakeholders, 25 groups in total, became part of the Savannah River Basin Advisory Council (SRBAC ).

As Krueger explains, each stakeholder joined the Council with a different priority: for water suppliers, the issue was water quality and quantity; for marina owners it was the navigability of the reservoirs; for scientists, the health of imperiled freshwater mussel and short-nosed sturgeon populations. The genius of the SRBAC is that it facilitates proactive communication among stakeholders so they feel invested in a river management solution that meets most of their needs most of the time. 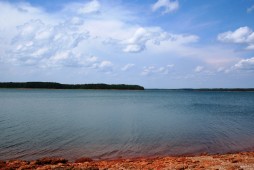 To develop a long-term solution for dam operations during droughts, the collated river data will be run through a model that demonstrates how different water release “alternatives” affect the entire river system and its users. According to Krueger, the goal of such an “alternatives analysis” is to discover an operational approach that “provides ‘enough water enough of the time’ to maintain or restore the ecology of a river.”

Incorporating this data into the drought operations manual is critical, because “we now know from a lot of environmental data that long-term droughts are part of a normal climatological process in southeast,” adds Will Graf, whose lifelong experience as a river scientist and whose current position on the Corps’ Environmental Advisory Board has been instrumental in helping broker the agreement.

To demonstrate how alternatives analysis affects real-life situations, Krueger describes how drought releases affect water levels in the Savannah’s side channels. A very low release results in a disconnection between the river’s natural side channels and the main river body.

As Eric Krueger explains, the alternatives analysis often shows that “there is a great overlap between what folks want to do out on the water and the more arcane interests in our natural biodiversity.”

What’s more, explains Graf, “I don’t know of a single example in river restoration where there has been no response. If we make improvements in habitat, we will get results.”

Graf cites the Green River in Kentucky, which has been in mitigation for 10 years now, as an example of how quickly freshwater systems can be restored. Just five years after instituting new dam operations, river mussel populations had improved greatly.

What will the end result of implementing the new drought operations manual be for the Savannah? “Low water conditions won’t automatically cause declines in the ecosystem’s health,” answers Krueger. “Quite the opposite. The Corps will be able to manage the dams in a way that results in enhanced spawning conditions for fisheries, regeneration of floodplain forests, improved water quality—including a higher dissolved oxygen content—and better access for recreational usage.”

The bottom line? Nature will still be in control, and we may experience more severe droughts in the years to come, but the Savannah River ecosystem and its users will be better equipped to handle them.

From the Savannah to the Yangtze

So exactly how did TNC and the Corps gather scientists and stakeholders together to collect river data and create a model that illustrates how releases affect the entire river system? Today, water managers call it “The Savannah Process.”

The term has “taken on a life of its own,” says Krueger. Moreover the methodology developed by TNC on the Savannah River has been applied to rivers across the country, including the Bill Williams River in Arizona and the Willamette River in Oregon, and to rivers across the world such as the Rio Patuca in Honduras and even the Yangtze River in China. This makes The Savannah—the river and the process—a local-to-global success story.